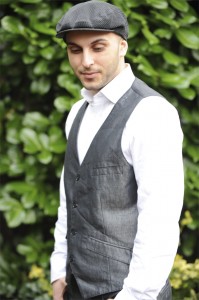 Ozie-N (birthname Hozan Saleyî) is born in 1983 in the town of Kirkuk. From the early age he started showing interest in music and by the age of 9 he was already a gifted violinist. In 1993, Ozie-N continued his music career in The Netherlands, where in 2005 he released his first english pop video clip.

This release received critical acclaim and brought Ozie-N his international breakthrough. Since then Ozie-N performed all over Europe and appeared in numerous radio and tv shows.

Next to his music career Ozie-N also pursued his academic career where in 2009 he received a bachelor’s degree in Communication & Multimedia Design from the University of Leeuwarden.

Right now he is working on an amazing album in his native language, which is a mix of middle-eastern music and english pop style, Ozie-N once again expands his musical capabilities and returns to his roots.